So far, 2021 has been a great year for the nascent offshore wind industry in the United States, as the Vineyard Wind 1 project received a Record of Decision from the Bureau of Ocean Energy Management (BOEM), paving the way for construction to begin. Located off the coasts of Martha’s Vineyard and Nantucket, Vineyard Wind 1 will be the first commercial-scale offshore wind project in the United States. The project will produce 800 megawatts of renewable energy (enough to power over 400,000 Massachusetts homes) and create thousands of local full-time equivalent jobs.

Epsilon has been leading the federal and state permitting effort for Vineyard Wind 1 from the start. Our talented team of energy experts, coastal scientists, engineers, and ecologists have been working hard to meet aggressive deadlines in managing the preparation and submittal of the Construction and Operations Plan (COP). As required by the lead federal permitting agency, BOEM, the COP details the Project’s planned construction and operational activities, as well as potential environmental impacts. Furthermore, Epsilon’s air quality team successfully managed the first-of-its-kind air permit process for an offshore wind project, which involved collaborating among numerous agencies over the past few years as well as a significant air dispersion modeling effort. The final result was Vineyard Wind 1 receiving an Outer Continental Shelf Air Permit. 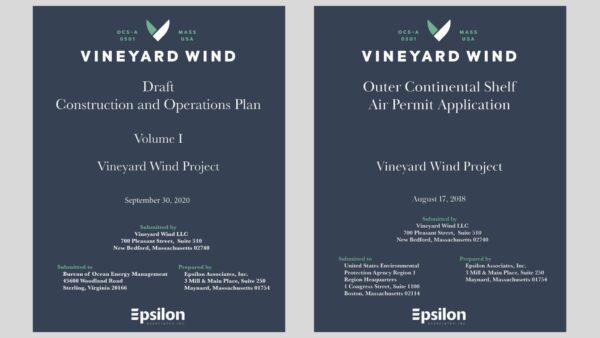 From the clean-up of a former coal tar processing facility to the emerging uses at the former Boston Market Terminal, for more than 20 years Epsilon has been supporting our clients’ redevelopment and remediation efforts along the Island End River in Chelsea and Everett. Most recently, Epsilon has been pleased to support The Davis Companies efforts to transform the former Boston Market Terminal, a key component of which involves significant infrastructure improvements, including the daylighting of approximately 400 linear feet of the Island End River that since the 1960s had been confined within a culvert.

Full and effective functioning of the stormwater conveyance via the Island End River is critical to the management of stormwater flows, not just at the former Boston Market Terminal but throughout nearby commercial and industrial areas in both Everett and Chelsea. In this case, the selected open-channel design will provide significant upstream and downstream flood mitigation and long-term durability. The newly daylighted segment of the river also provides important environmental benefits, including additional flood storage and velocity reduction, nutrient retention, increased infiltration, and aesthetic improvements.

Epsilon completed the project’s MEPA documentation and secured authorization for the improvements from MassDEP’s Waterways Regulation Program under Chapter 91.

As climate change continues to express itself in various ways, protecting waterfront property and infrastructure is an urgent matter. The longstanding traditional protection methods such as seawalls and stone revetments are effective but in specific cases they can have adverse effects on natural systems, therefore alternatives need to be sought when hardened shorelines are not the preferred solution. The Epsilon team has a depth of experience working to plan and permit resilient shorelines in tidal and non-tidal waters. A few examples include the MBTA Charlestown Bus Garage Resiliency Project on the Mystic River in Boston and Somerville, MA; the Senator Joseph Finnegan Park at Port Norfolk on the Neponset River in Boston, MA; the Sconset Bluff Stabilization Project on Nantucket, MA; and the Merrimack Riverbank Stabilization Project at Wellman Avenue on the Merrimack River in Chelmsford, MA.

The nearly 4,000-foot long Merrimack Riverbank Stabilization Project at Wellman Avenue demonstrates how combining natural (“soft”) solutions with traditional (“hard”) civil construction can protect important infrastructure while maintaining a natural system. The success of the project demonstrates that “hybrid” approaches should be examined and selected when site conditions allow.

The project site supports a 700-unit waterfront condominium development built in the mid-1980’s. Since its construction, the riverbank had eroded with some portions exhibiting nearly vertical slopes up to 16-feet high. The gravity sewer serving the development is parallel to the bank and portions of the sewer line were only10-feet from the top of the bank when planning and design began. During previous intense storms and flooding events 6- to 10-feet of the bank had eroded during single storm events, thus the sewer was at risk for exposure and damage. The bank needed to be stabilized to avoid environmental harm from a raw sewage discharge to the Merrimack River should the sewer be exposed and rupture. Several bank stabilization options were evaluated, and from those options the hybrid solution (i.e., a stone sill with a vegetated slope above it) was selected as the option that would protect the sewer for the long-term and concomitantly provide riparian habitat.

Above the stone sill, coir rolls were installed to form the soil slope and provide a more robust slope while planted vegetation becomes established and binds the soil. Existing mature and stable trees were retained to protect riparian habitat features and retain tree root matrixes that provided soil stabilization. To protect fisheries habitat, the stone sill was constructed using large stones to leave interstitial spaces, refugia, along the toe of the bank. On the re-constructed slope approximately 3,500 shrubs and 850 trees were planted above the sill, and the slope was overseeded with grasses and forbs to stabilize the soils. Over time, vegetation is expected to develop and provide travel corridor and feeding habitat for terrestrial wildlife, and shade from overhanging branches will improve riverine habitat.

Epsilon led the planning and environmental permitting efforts to bring this project to fruition. Epsilon staff worked with the Town and the condominium association to secure a FEMA Hazard Mitigation Grant to fund this project. Epsilon then worked to secure local, state, and federal permits, which included among others: MEPA review, Chapter 91 License, NHESP review, and a U.S. Army Corps of Engineers Individual Permit. Team Members GEI Consultants Inc. led the design, PAL provided cultural resources assessment and permitting, and SumCo Eco Contracting constructed the project. 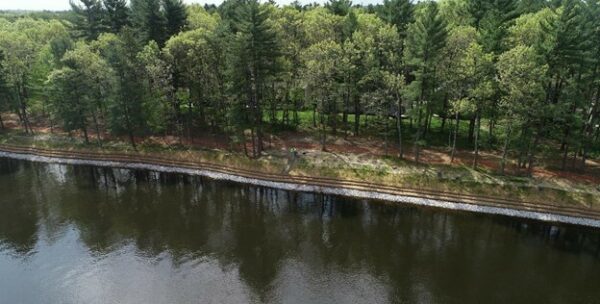 We’re Hiring! Join our talent team of planners, engineers, and environmental scientists for an opportunity to participate in a range of challenging, high-profile projects. Check out our current job openings.

Where We've Been (And Where We're Going)

Sponsored & Presented – While many events remained virtual, we were still able to support and virtually attend many of the conferences we normally do in the spring. This included sponsoring both the 27th Annual New England Energy Conference as well as the IPPNY Spring Conference. As the Showcase Sponsor for the 27th Annual New England Energy Conference we were able to showcase our firm in a short video, check it out here.

We sponsored the Massachusetts Preservation Awards, which took place in May. A number of teams that Epsilon was a part of, providing historic preservation services, received awards for projects that helped to preserve history here in the Commonwealth. The projects included Allen House in Newton, Cobbet Hill Apartments in Lynn, Moseley School in Westfield, Reed Toy Factory in Leominster, and St. Gabriel’s Complex in Brighton.

Associate Brian Lever presented on historic tax credits to the Massachusetts Association of Community Development Corporations on June 30th. His presentation focused on good practices in using the Historic Tax Credit, including in conjunction with the Low-Income Housing Tax Credit. Combining Historic and Low-Income Housing Tax Credits makes affordable housing projects financially feasible, and these two funding sources are often used together. Epsilon is proud to have assisted in the creation and rehabilitation of affordable housing throughout New England.

On July 16, the Environmental Business Council of New England held its Third Annual New England Energy Leadership Conference, for which Epsilon was a platinum sponsor. In addition, Principal Marc Bergeron served as co-chair and moderator for the event along with Catherine Finneran, Vice President of Sustainability and Environmental Affairs at Eversource Energy. This virtual event brought together state leaders in energy policy programs from across New England along with ISO New England and other industry leaders. The focus of the event was to provide updates regarding energy plan and program priorities throughout New England; including topics such as decarbonization goals and strategies, clean energy job programs, and equity. The event was well attended by industry leaders.

Congratulations! Principal Dave Hewett along with representatives from several other firms and organizations received the EBC Nicholas Humber Environmental - Energy Award for Outstanding Collaboration for their joint effort on Polar Park. The award was given in recognition for completing a challenging urban renewal project that has resulted in the revitalization of more than 18 acres of long-vacant brownfields in Worcester’s Canal District. Check out our website for a full write up on this.

We often join forces with other firms providing the permitting support as part of a team that works to bring a project from inception to completion. Given that we regularly collaborate with other firms, we have received this same award for three other projects:

In the Community. Project Scientist Megan Kearns was recently selected to serve as a Commissioner on the Somerville Conservation Commission. She is excited to serve on the commission helping to protect Somerville’s natural environment.

Welcome! We recently welcomed several new employees to the Epsilon team. We are excited to welcome both Alex Brooks, Albert Good, Laurie Morrill, Caitlin Hammer, and Amanda Ingram. Alex is a mechanical engineer and Certified Energy Manager with a background in energy efficiency and building systems. Albert is an environmental planner who will be working on projects in the City of Boston and throughout the state. Laurie has joined our acoustics group and will be involved in noise control, sound level modeling, and the assortment of daytime and late-night sound level measurement programs. Caitlin and Amanda have joined our coastal group helping with our offshore wind projects.

We are excited to welcome Alex, Albert, Laurie, Caitlin, and Amanda to the team!